"I would give birth if I could." 13 celebrities who had children via a surrogate. – Mamamia

Last week, Nick Jonas announced that he and his wife Priyanka Chopra secretly welcomed their first child together via surrogate.
"We are overjoyed," the singer, 29, shared on Instagram.
"We respectfully ask for privacy during this special time as we focus on our family. Thank you so much."
A post shared by Nick Jonas (@nickjonas)
Following the announcement, a source close couple told the Daily Mail that their child (which has since been announced to be a baby girl) arrived prematurely.
"The baby had been due in April, but the surrogate ended up giving birth on Sunday (January 16), so she was very premature," the source told the publication.
"Priyanka had been trying to get her filming all done before the baby was due in April – but obviously this has completely thrown her plans," they said.
The source also noted that Jonas and Chopra decided to welcome their child via surrogate a while back.
They explained that Priyanka "doesn't have any fertility issues preventing her having a baby, but she is 39 now so it's not getting any easier.
"Their busy work schedules also mean that it's difficult for them to physically be together to conceive when she is ovulating, so some time ago they went down the surrogacy route."
There are many ways to welcome children in 2021, including through IVF, surrogacy and adoption.
Surrogacy refers to an arrangement where a woman becomes pregnant and gives birth to a child for a couple or person.
There are two types of surrogacy:
1. Gestational surrogacy, when the surrogate has a fertilised embryo transferred into her and therefore has no genetic contribution to the child they're carrying. This is the most common type of surrogacy in Australia.
2. Traditional surrogacy, when the surrogate provides the egg, therefore contributing genetics.
Here are 12 other celebrity parents who welcomed children via surrogacy.
In July 2021, Amber Heard announced the arrival of her first child, Oonagh Paige.
The 35-year-old actress shared the news on social media, explaining that she'd wanted children for quite some time.
"I’m so excited to share this news with you," she wrote. "Four years ago, I decided I wanted to have a child. I wanted to do it on my own terms."
"I now appreciate how radical it is for us as women to think about one of the most fundamental parts of our destinies in this way. I hope we arrive at a point in which it’s normalised to not want a ring in order to have a crib.
"A part of me wants to uphold that my private life is none of anyone’s business. I also get that the nature of my job compels me to take control of this."
A post shared by Amber Heard (@amberheard)
Oonagh was born via surrogate. As a close friend explained, that was because Heard was told she couldn't carry children.
"Oonagh is absolutely gorgeous, and Amber is besotted," the friend told Page Six. "She always knew that she wanted to be a mum, and this is her greatest wish come true. She’s so grateful to the wonderful woman who helped bring Oonagh into her life."
"The most important thing for Amber is that she’s open about Oonagh’s birth," they continued.
"There are so many women who feel they can’t talk about their fertility and are worried and embarrassed; Amber wants them to feel supported and realise that there are a multitude of ways to have a baby even if you have fertility issues."
A post shared by Kim Kardashian West (@kimkardashian)
After two complicated pregnancies, Kim Kardashian and Kanye West welcomed their two youngest children, Chicago and Psalm, via surrogates.
"When I was pregnant with my daughter North, I had a condition called preeclampsia or toxemia, which is basically when the mum’s organs start to shut down," Kardashian said in a 2019 video for her shapewear line, Skims.
After an emergency labour at 34-and-a-half weeks, Kardashian experienced placenta accreta — a life-threatening condition where the placenta grows inside the uterus. While she was able to freeze her eggs and fall pregnant with Saint, the same situation happened the second time around, and doctors wouldn't allow her to go through pregnancy again.
"They were like, 'We won’t even put an embryo in you — that would be like malpractice'," she said during the video.
While she found the experience of going through surrogacy "harder", it was the best decision for her family.
"You know, it is really different," Kardashian told ET in 2017. "Anyone that says or thinks it is just the easy way out is just completely wrong. I think it is so much harder to go through it this way, because you are not really in control.
"And, you know, obviously you pick someone that you completely trust and that you have a good bond and relationship with, but it is still … knowing that I was able to carry my first two babies and not, you know, my baby now, it's hard for me. So, it's definitely a harder experience than I anticipated."
Chicago was born in 2018 and Psalm in 2019.
A post shared by SALLY OBERMEDER (@sallyobermeder)
In 2011, the day before Channel 7 TV presenter Sally Obermeder gave birth to her first daughter, Annabelle, she was diagnosed with stage-three breast cancer. While she was given the all-clear after an eight-month battle and 16 rounds of chemotherapy, Obermeder was also told it would be difficult for her to carry a pregnancy in the future.
"I wanted Annabelle to having a sibling. It was so strong," she told Mia Freedman on Mamamia's No Filter podcast.
As compensated surrogacy (that is, an arrangement in which the surrogate benefits financially) was and is still illegal in Australia, the family struggled to find a willing candidate locally. They ultimately went to the US, where they met their surrogate, Rachel.
The mum-of-three carried Obermeder's second daughter, Elyssa Rose.
A post shared by SALLY OBERMEDER (@sallyobermeder) 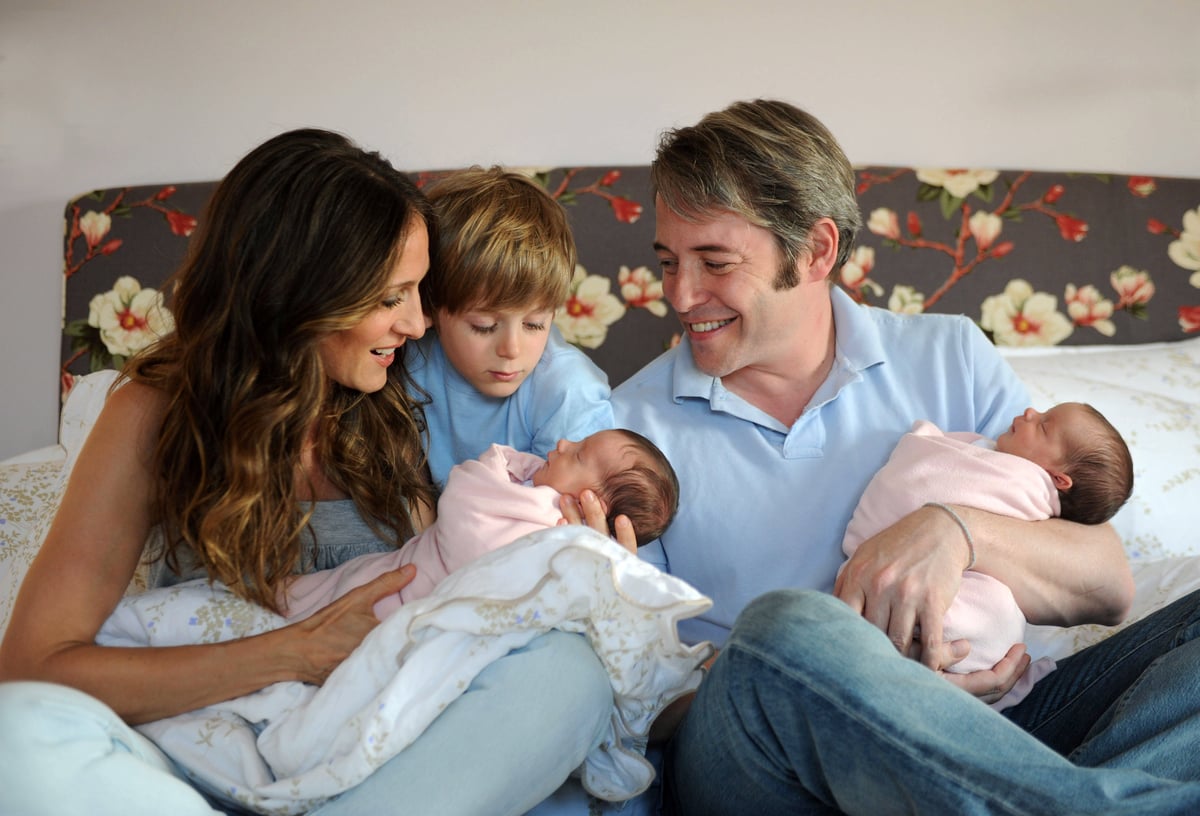 Image: Getty.
In 2009, Sarah Jessica Parker and Matthew Broderick welcomed twins via surrogate.
After the And Just Like That… star gave birth to their first son, James Wilkie, in 2002, aged 37, the couple looked into various ways to welcome another child. "We tried and tried and tried and tried to get pregnant," she told US Vogue. "It just was not to be, I would give birth if I could."
So she and Broderick chose a surrogate, Michelle Ross, 26, who gave birth to twin girls, Tabitha and Marion, in June 2009.
A post shared by Nicole Kidman (@nicolekidman)
Nicole Kidman and Keith Urban's second daughter, Faith, was born via surrogate in 2011.
"Our family is truly blessed, and just so thankful, to have been given the gift of baby Faith Margaret," the couple said in a joint statement, according to Reuters.
"No words can adequately convey the incredible gratitude that we feel for everyone who was so supportive throughout this process, in particular our gestational carrier."
A post shared by Lucy Liu (@lucyliu)
Actress Lucy Liu told People using a surrogate was the "best solution".
"[Surrogacy] just seemed like the right option for me because I was working and I didn't know when I was going to be able to stop," Liu told the publication. "I decided that was probably the best solution for me, and it turned out to be great."
She welcomed her son Rockwell in 2015.
A post shared by Neil Patrick Harris (@nph)
Neil Patrick Harris and his husband, David Burtka, welcomed their twin babies, Gideon and Harper, in 2010, with the help of a surrogate.
Speaking to Wendy Williams, Burtka shared how it was a lot harder for them.
“It’s a lot harder for gay guys [to have kids], although we tried!” Burtka joked to Williams.
He explained: "[there were] two different women involved. There was an egg donor, a wonderful woman who was anonymous. We took two of our best guys and implanted them into her eggs, two different eggs."
Therefore, neither of them knows which twin is biologically theirs.
A post shared by Tyra Banks (@tyrabanks)
Model-turned-television-presenter Tyra Banks and her ex-boyfriend Erik Alsa's "miracle baby", York, arrived via surrogate in 2016.
"The best present we worked and prayed so hard for is finally here. He's got my fingers and big eyes and his daddy Erik's mouth and chin," Banks wrote on Instagram.
"As we thank the angel of a woman that carried our miracle baby boy for us, we pray for everyone who struggles to reach this joyous milestone. York Banks Asla, welcome to the world."
She never shares photos of him publicly.
A post shared by Elizabeth Banks (@elizabethbanks)
Actor/director/producer Elizabeth Banks has spoken candidly about not being able to fall pregnant and using surrogates for both of her sons, Felix and Magnus.
"The one true hurdle I've faced in life is that I have a broken belly. After years of trying to get pregnant, exploring the range of fertility treatments, all unsuccessful, our journey led us to gestational surrogacy. From that came two miracles. The first was meeting our carrier and her husband who were truly humbling in their decency and generosity. And the second miracle was the birth of our baby boy, Felix Handelman," the Pitch Perfect producer and star wrote on her blog.
"Like Felix, Magnus was born via gestational surrogate. This experience has exceeded all expectations, taught us a great deal about generosity and gratitude, and established a relationship that will last a lifetime," she said.
Banks and her husband, Max Handelman, are another celebrity couple who never share photos of their children.
A post shared by Ellen Pompeo (@ellenpompeo)
Grey's Anatomy actress Ellen Pompeo and her husband, Chris Ivery, have three children: Stella, Sienna and Eli. While Pompeo carried their first daughter, surrogates carried the second two.
"This is an incredible thing to do with your life, to give the gift of carrying someone's child," she told Jimmy Kimmel in 2014. "I am forever grateful and feel very blessed and grateful to her – she who will remain anonymous."
"I was there with her when they inseminated her, and we held hands. I looked into the microscope and I saw the embryo."
A post shared by Jimmy Fallon (@jimmyfallon)
Jimmy Fallon and his producer wife, Nancy Juvonen, quietly welcomed two daughters via surrogate.
"My wife and I had been trying a while to have a baby. We tried a bunch of things — so we had a surrogate," Fallon told the Today show, after the birth of his daughter, Winnie, in 2013.
"We said, 'We're not going to tell anybody.' It'd be just more fun if it's just private between me and my wife. And then we get to introduce her to everybody."
They did the same thing for baby number two, Frances, in 2014.
A post shared by Gabrielle Union-Wade (@gabunion)
In 2018, Gabrielle Union and her husband, ex basketballer Dwyane Wade, welcomed their daughter, Kaavia, via surrogate.
Announcing the exciting news on Twitter, Wade wrote, "We are sleepless and delirious but so excited to share that, our miracle baby, arrived last night via surrogate and 11/7 will forever be etched in our hearts as the most loveliest [sic] of all the lovely days.
"Welcome to the party sweet girl."
TAKE SURVEY ➤
This post was originally published on July 3, 2021, and was updated on January 25, 2022.
Feature image: Getty.