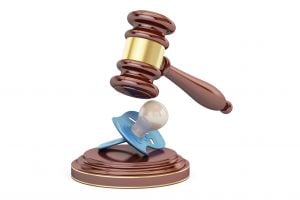 Last week, we learned of the unfortunate death of Seraphina Harrell at the tragically young age of 8 years old. Prior to, and shortly after, her birth, Harrell — once known as “Baby S” — was at the heart of a surrogacy dispute that resonates to this day. Ground zero for this dispute and controversy over surrogacy in the United States continues to be the Great Lakes State — Michigan.
The Baby S Case. The Baby S Case started like many surrogacy arrangements. A Connecticut couple hoped for a child — in this case, another child, as they already had three. The couple had two cryopreserved embryos, but had received medical advice against attempting another pregnancy themselves. So, they turned to surrogacy.
Crystal Kelly, a former nanny, mother of two, and fellow Connecticut resident, was introduced to the couple through a surrogacy matching organization. She agreed to be a surrogate for the couple and an embryo transfer procedure successfully resulted in a pregnancy. Unfortunately, about halfway through the pregnancy, doctors delivered the news that the fetus had a number of serious medical complications, including a cyst in the brain and a complex heart abnormality. The intended parents requested that Kelly terminate the pregnancy, and Kelly declined. She then moved, with her two children, to Michigan to give birth to the child.
Why Michigan?
Today, Michigan is the only remaining state in the United States to criminalize compensated surrogacy. Although, only eight short years ago, Michigan had company. New York, for instance, only recently reversed its law criminalizing compensated surrogacy this past legislative session. Washington State, New Jersey, and the District of Columbia — themselves once having statutory opposition to surrogacy like that of Michigan — each recently embraced regulated compensated surrogacy only in the past few years. Michigan state law remains, however, and continues to provide that compensated surrogacy is against public policy, and moreover, that any surrogacy contract, compensated or not, will not be enforced within the state.
Participants to a compensated surrogacy arrangement — meaning the intended parents or the gestational carrier — are subject to criminal liability. Such participants can be found guilty of a misdemeanor, including consequences of up to $10,000 in fines and up to a year in jail. A nonparticipating party who “induces, arranges, procures, or otherwise assists in the formation of a surrogate parentage contract for compensation” (such as surrogacy matching organization or an attorney), faces even more severe consequences. They could be convicted of a felony punishable by a fine of up to $50,000, and up to five years in prison. Or both.
By becoming a Michigander and giving birth within the state, Kelly was able to be recognized as the legal parent of the child — despite having no genetic connection to the child, and having affirmatively entered into a contract specifically to carry the child for another couple. Kelly then facilitated the adoption of Baby S to other parents, who had prior experiences raising children with special needs.
The story of Harrell’s bumpy beginnings is an important one for all those considering entering into a surrogacy arrangement. Most parties and facilitators now understand how critical it is to have everyone fully informed and on the same page when it comes to medical complications and termination issues. Maybe even more importantly, Harrell’s situation brings to light the serious issues presented by Michigan’s surrogacy laws, unrelated to termination.
I had the chance to speak with Michigan attorney Dion Roddy, to understand if this was merely an issue of the past. It is not.
A ‘Safe Haven’ For Surrogates to Keep The Baby?
Roddy explained that although legislative efforts have been made to change the law in Michigan, those efforts have not yet seen success. That means that if a gestational carrier from any state were to move to Michigan and give birth, she would appear on the child’s birth certificate and likely be recognized as the child’s legal parent.
Under Michigan law, if there was a dispute, the party with physical custody of the child (most likely the surrogate) would retain custody until a court ruled otherwise. The court is instructed to look to the best interests of the child. That, Roddy described, could be very fact dependent. If the surrogacy arrangement were altruistic and at least one of the intended parents were genetically connected to the child, and there were no other significant factors weighing against them, a court would likely find the child’s best interest were served by being with his or her intended parents.
However, if the surrogacy arrangement was compensated, Roddy explained, the participants could be facing criminal prosecution in Michigan. And, while an attorney may be able to help with the custody piece, most Michigan attorneys would not touch any other part of a compensated surrogacy arrangement, including any actions to obtain a birth certificate or have the intended parents named as legal parents, either pre- or post-birth, out of risk of falling within the criminal provisions of the statute.
Of course, a surrogacy arrangement is all about trust. Hopeful parents are trusting a surrogate not to do drugs, go skydiving, or … move to Michigan. Hopefully, Michigan will update its laws. In the meantime, beware of the Great Lakes State.

Ellen Trachman is the Managing Attorney of Trachman Law Center, LLC, a Denver-based law firm specializing in assisted reproductive technology law, and co-host of the podcast I Want To Put A Baby In You. You can reach her at [email protected].
Assisted Reproductive Technology (ART), Baby S, Family Law, Surrogacy
We will never sell or share your information without your consent. See our privacy policy.
As If Law Schools Needed To Be More Sus: Scam alert involving checks “from” law school.
But These Checks Are Better: We’ve got another Milbank match.
Give A Gift That Lasts: Rat out your ex to the feds!
Lawyer Ad Budgets Are Up: Super Bowl attorney ads follow in the footsteps of some legendary commercials.
No He’s Not: Rudy’s telling people he’s ready to cooperate in January 6 probe. Don’t fall for it.
Our Sites
© 2022 Breaking Media, Inc. All rights reserved. Registration or use of this site constitutes acceptance of our Terms of Service and Privacy Policy.
Privacy Center | Do not sell my information